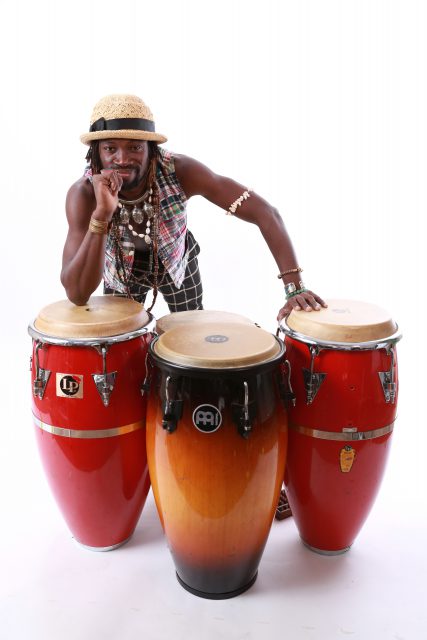 He began his general education curriculum in Yamoussoukro. And desire for him to learn the percussion is manifested early. Of the age of 7 he starts banging on the drums without being invited. Love at first sight is clear, it follows a true love story that will trace the paths of the future prodigy.

Alternating between classroom sessions and self-study, Oswald Kouame gives hard time to those who discouraged not only concentrate on studies, there is the serious”artists still die miserable”said they.

But the pastime of the young are furnished only by the ripples it produces with his hands on a sheep’s skin dry, standing on the surface of a hollow log of wood beast that serves as percussion.

The young prolific walks the streets of the political capital to meet the many demands placed on it is already covered. The first work is carried out within the religious arena with a detour in the Christian community barefoot.

In 1991, he flew for the first time for Canada to the account of an autonomous structure for a musical workshop. On his return, Oswald Kouame is sought by several organizations.

In a productive intelligence, Kouame Oswald leads a course of study without obstacles until the end of his high school science curriculum (Felix Houphouet Boigny) Yamoussoukro. In high school, the young musician is the darling of all the performing arts where his reputation continues to grow.

Excellent percussionist,””LAKAL as his close call never missed the first three steps of the podium at award ceremonies of the best in various sports and artitistiques, including choreography, staging, musical.

The young prodigal already showing the traits of a seasoned professional musician so he is praised with praise after his performances more and more frequent, and to an ever wider public. The whole town talking. He trainer converted into a group of European students at the French cultural center of the political capital.

Feeling the music thing take over its aspirations in civil engineering and surveying stroked it, Kouame Oswald decides to come to Abidjan to register for the National Institute of Arts and Cultural Action, INSAAC.

It’s two years later that the school will include well-known, the better equipped in terms of artistic training of state in Cote d’Ivoire and West Africa. But meanwhile, he started a real musical journey.

He joined several bands and musical groups (Village Ki yi, Afrozik, Soteka, etc.).Has made several trips abroad to benefit both the sub-region in Europe. Always eager to musical culture, he began a discovery of traditional music as a background with the main Ivorian percussion.

He travels the hamlets of central, western and southern Ivory Coast in search of rare sounds and instruments atypical. Identified by Professor Georges Niangoran Bouah, initiator of the dromology (the study of the talking drum), he went to learn this science for three years.

Assured of his vocation as a percussionist, the young Oswald is convinced to bring a professional touch with a diploma in music education in music and musicology at the INSAAC.

The institute keeps in golden letters in its path. Kouame Oswald was the product par excellence of the institution associated to all the cultural events in both Ivory Coast and abroad. With all his experience and he kisses her degree heart’s content the professional world, and into the big leagues.

The musician is rubbed by the Ivorian Television, where he joined the orchestra of the private media of state. With a calendar filled, Oswald Kouame has the wind in purple, they are great cultural scene for its host of benefits including Chad, Gabon, Ghana, Niger, Mali, Burkina Faso, Senegal, Cameroon, Tunisia, Morocco, France , Cape Verde, Guinea, South Africa etc.. Among the festivals which he participated, the Festival of Negro Arts in Senegal, Dunihl Jazz, Gospel roots, world music etc..

As in musical parlance, he decided to play its ‘solo’, considering his own career. Thus it ‘change-end’ and heads for the Ghanaian capital Accra that he is not foreign for that matter.

The choice of Accra since 2011 to stay close to his country with an unstable political period, and as he says, willing to have the spirit of creativity that is its daily sharing. Shortly after arriving in the land of Kwame Nkrumah that the stresses are knocking on his door solicitations of any kind with renowned Ghanaian artists and international groups.

The man still seems to give the hair of the beast, then he thought to devote himself to himself. All spaces live Accra court to make him a benefit. Standing on the years of experience he created a band in Accra, called”Oswald’s Band”with which it rotates, and success is the appointment.

With this band, it still is endeavoring to convey his art by making a music search and Afro-Jazz fusion, open to the use of all elements of nature (water, rice, leaves, branches, sand, gourds, kitchen utensils etc.)..

Oswald Kouame is a crazy talented, meticulous, in a situation of continuous and spontaneous creativity.

Everything becomes a Music Oswald Kouame
Album
Biography since 2014